I guess I feel like I should say something...

I voted for the first time yesterday. I would like to detail for you my experience. Okay....just kidding. it's not for you, it's for my posterity!

...like my kids will ever want to go back and read some ancient communication like a "Blog...."

On Tuesday morning, I was still worried because I wasn't sure who I was going to vote for. I prayed some more, and eventually, I felt at peace. I hadn't made a decision, but I felt like I was ready. I drove to South, and stepped out of my car. I walked up the long sidewalk to the school and.....

I have to sidebar this story, because it amused me. I purposefully did not vote for the judge that was standing on the sidewalk up to the school because he was arrogant, AND he was standing too close to the polls. I would have scribbled out his name if the computer allowed it.


Anyway...I walked up the looooooong sidewalk to the school, waited in line for what seemed like an eternity... just kidding, I waited in line for all of thirty seconds... and then I walked to my voting booth. I inserted my card, and instantly felt guilty...like I was spending money I shouldn't. Hahaha...it was like a credit card, you have to admit.

Anyway...the presidential candidates come up on the screen. I stare at them for a few seconds, and then I find myself pressing the box next to the name "John McCain." I finished voting, pressed to go to the next page, and a flood of emotion hit me. I knew I'd done the right thing.

Now...I'm not saying the right thing to do was to vote for McCain. I don't know if it was or not. In all actuality, it doesn't even matter. Obama is now the President Elect. I'm okay with that too. But what I did, was give it my all. I did my research. I said my prayers. I voted where my heart was. I agreed mostly with McCain's morals, and I felt like when push came to shove and I didn't want to vote for either...so I voted based on morals.

I feel good about it.

I also voted for Ken Keith. He smiles and waves a lot. Puts me in a good mood every time I see him on the corner.

So for the first time in my ENTIRE LIFE, I was part of something massively historic. I voted against the first African-American president. Well, really....I canceled out Christopher's vote. Such is life. ;-)


In other news, tomorrow is Christopher's birthday. You oughtta tell him happy birthday and stuff. :) Maybe he'll start blogging. 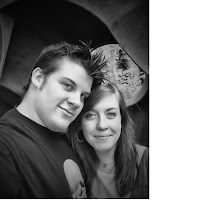 Haha. This funny to me. That you canceled out Chris' vote. For in my house, it was opposite. I was the hippie Obama supporter and Bill the McCain supporter.Then, my mom voted McCain my dad (shockingly) Obama. AND Bill's mom voted Obama and Bill's dad voted McCain. Basically all our votes just negated each other.
Oh Democracy.

I don't know if your posterity will ever read your account but I thoroughly enjoyed it! Our area still uses paper ballots so I felt like I was back in grade school filling in the boxes (completely... don't leave any white 'cause then it may not count, ya know!)

Congrats on your first presidential election, personally I think you made the right decision too- but I'm sure that really doesn't mean a whole bunch.

Congrats on truly being a grown up. lol... It's a good thing to research and pray and do your civic duty. Our family canceled each other's votes, too. So it goes.

I agree - this is a great pic of you two!