The North Pole and The South Pole

I've been debating about whether or not I wanted to write this for some time. Clearly the decision has been made, and I've chosen to write. If you don't want to read the whole thing, don't. I don't even know how long it's going to be, seeing as once I get started, I may not stop. The subject line may be a bit deceiving. I'm not talking about Santa or penguins. I'm talking about....

"Bipolar disorder, also known as manic-depressive illness, is a brain disorder that causes unusual shifts in a person’s mood, energy, and ability to function. Different from the normal ups and downs that everyone goes through, the symptoms of bipolar disorder are severe. They can result in damaged relationships, poor job or school performance, and even suicide."
-National Institute of Mental Health

My life has been filled with unavoidable ups and downs. I don't usually mind them so much...I'm used to it. I've had some big things happen in my life. My mother passed away when I was six years old. My dad remarried quickly. My sister became a mom to me...and she left for college. I was overweight, awkward, and shy. I know you don't believe it...because I was overweight, awkward, and INCREDIBLY LOUD. That's my bipolar talking.

According to my dad...and this seems to make sense, people who are bipolar tend to be recognized by their manic modes. You all probably know me as bubbly, outgoing, smiling, happy, loud, rambunctious, and energetic.

What you don't see are the hours of crying, the sleepless nights, the endless fatigue. You don't see the times Christopher has to wait with me until I can calm down, the hours he's spent trying to convince me that everything will be okay, and that I'll pull out of the depression eventually.

So maybe the point of all of this is to convince you that Christopher is a saint. He is. 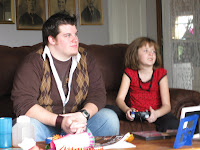 I've spent most of my life dealing with what I call "Trust issues." It means that I hold my guard up VERY well until I know how to trust someone. There are very few people that I have ever been able to trust completely. Christopher is one of them. Because I trust him completely, for better or for worse, he gets to see both sides.

We start out the evening just fine. I'm happy, he's happy, and we've both returned home from work. We laugh and play...we make dinner, turn on our favorite show, and build a fire.
...wait, what? I can't build the fire fast enough? Here it goes...and I'm gone.
suddenly the world is a miserable place. A place where I'm convinced that I don't do anything well enough, that everyone hates me, that nothing really matters. I try to hold on to myself for a few minutes, but we all know what's about to happen...

You get the picture. Nagasaki has just occurred in the family room. So he calms me down. He makes me drink some water. He waits until it's over. And then I'm fine again.

Luckily, because Christopher knew what was going on, he was able to discuss it with our family doctor when I went in for my initial visit. The verdict, you already know. Bipolar disorder.

So I take Prozac and Depkote. How does it feel to take an anti-psychotic? Ha...well, at least I'm not as psychotic while I'm taking it.

"Be kind, for everyone you meet is fighting a hard battle."

Lots of people struggle with things that nobody else ever knows they're struggling with. This is my battle. I don't tell you so that you'll feel sorry for me, I tell you so that maybe someday, somehow, you might feel like it's okay to be fighting a battle of your own. I have been fighting this for most of my life. I just recently started with the medication. The truth is, my greatest help came from


I know it's hard. But even without the Prozac...there's an answer.

How blessed we are to have the atonement of Jesus Christ to make us strong! Christ experienced all of these things so that we can be succored.

I guess that's all for now. Just some food for thought.

Adrienne - I'm sorry. I am so glad we live in the day and age where there are little pills to make life more bearable. I'm also glad you have someone that we be there through the thick and thin.

What a relief to be able to put a name to something you've struggled with your whole life. It makes it concrete and easier to deal with. When I face big trials, I know I feel better realizing I'm not just weird.

Hooray for Christopher! What a blessing to have his love and support.

This is profound: "Lots of people struggle with things that nobody else ever knows they're struggling with. This is my battle. I don't tell you so that you'll feel sorry for me, I tell you so that maybe someday, somehow, you might feel like it's okay to be fighting a battle of your own."

Thanks - I need the reminder that it's okay to struggle at times with my own personal battles.

I am really impressed with the trust that you've shown in sharing such a personal and difficult struggle on here. That takes a lot of courage. Bipolar is so hard with it's extremes. I hope that you're able to find more peace and stablility with the meds.

We missed you tonight at the Christmas Party. Cris looked like a sad little puppy without you. You two are amazing together!

Adrienne, I just love and miss you. Our talks with Michelle...you are awesome. Good post.

love you girl. so much. i'm going to call you pretty stinking soon cause i miss your voice/having you in my life.

Hey babes... I love your face ( : I know you'll get through this. Because you know what? Despite your moments of weakenss, you are a strong woman with a tremendous fighting spirit in you. I love you! I'm happy you have Christopher.

I found your blog! Aaaaannnndddd, I'm so glad I did! I am happy you could write that and have a positive outlook. You're incredible, and just remember I think you are too. Tons and tons of love. Love, Lauren

Your Plato quote is one of my favorites. It is so easy to be judgmental of those around us without ever seeing the battles they are fighting day in and day out. Thanks for sharing your story. I've struggled with depression and anxiety on and off since I was 15 and have been very grateful for medication 2 years of my life. I'm very glad you were able to get a diagnosis and start feeling better. I'm also glad you have Chris. He's a keeper!
Maura

So, you JUST got diagnosed? Did you know I have bipolar? Diagnosed 10 years ago. So we can talk any time you want! If you gain a lot of weight on Depakote (I know I did!) and hate its guts, try Lamictal. I switched to it in college (I was actually on Neurontin for several years after we figured out the Depakote was making me gain weight, but I always lean to the depressed side and Lamictal is supposed to be the best mood stabilizer for that) and it's GREAT. And pretty darn safe for pregnancy and breastfeeding!!!